Belt drives for power transmissions are classified as frictional drives since the belt transmits power via friction between the belt and the driving and driven pulleys.

Flat belts and V-belts transmit power by their grip on the pulley. The three major factors that determine the potential of grip are the area of contact, belt tension, and the coefficient of friction. 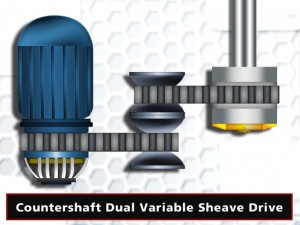 Belt Tension – The best tension for a V-belt is the lowest tension at which the belts will not slip under full load. Belt tension should be checked frequently during run-in and the first 24-48 hours of operation. Over-tensioning will lead to reduced belt and bearing life, while too much slack will cause slippage and excessive belt wear.

When selecting a belt, several considerations must be taken into account to ensure proper operation, long belt life, and low maintenance requirements. Belt drives may seem simple in design but many factors are considered when selecting the proper belt for all applications.

Environmental Factors – Belt selection must take into account the environmental conditions, such as:

System Requirements – System requirements are also crucial to belt selection, the following are some considerations that are taken when selecting a drive belt: