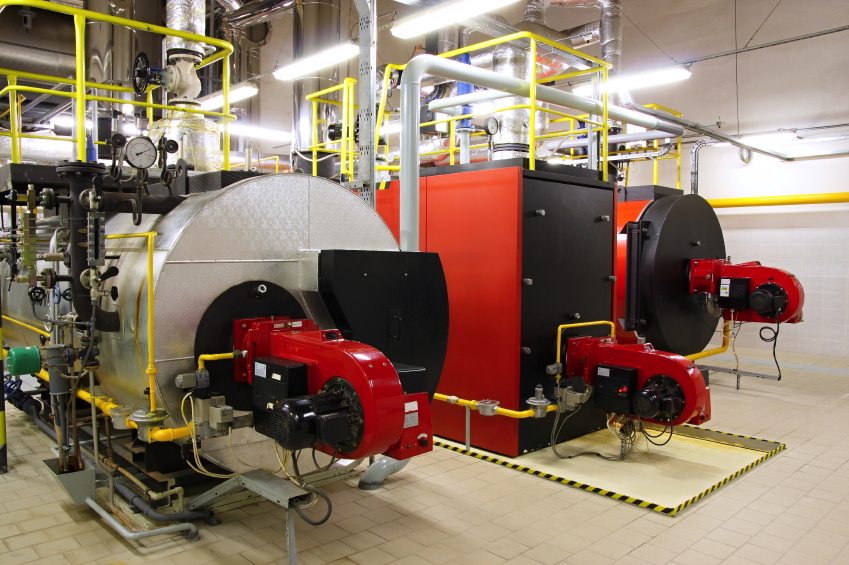 In steam and condensate systems, heat is added to water in a boiler causing the water to boil and steam to form. Steam, like any other liquid or gas, flows from areas of high pressure to areas of low pressure. Naturally, the steam pressure is at its highest as it exits the boiler. The higher pressure in the boiler drum forces the steam out through the main steam line. The steam is piped to points requiring its energy and, as the heat and pressure are transferred from the steam to the various plant equipment or processes requiring steam energy, it condenses to form condensate, which is transferred via the condensate system.

The amount of steam flowing from the boiler and the amount of water pumped back to the boiler must be equal. Since the steam cycle is a closed loop system, losses due to leaks, blowdown, and blow-offs due to excess pressures, have to be replaced to maintain a desired water level in the boiler’s steam drum. Consequently, makeup water must be added as needed to the boiler water system. 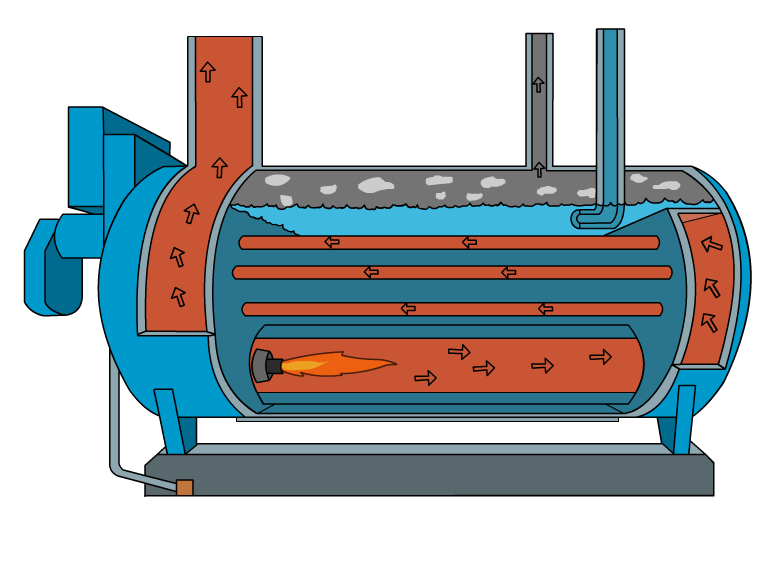 A fire-tube boiler’s main components include a cylindrical shell, a series of tubes, a feedwater inlet line, and a combustion gas outlet stack. The name “fire tube” is very descriptive. The fire, or hot flue gases from the burner, is channeled through a group of steel tubes that are surrounded by a shell filled with water. Every set of tubes that the flue gas travels through before making a turn is considered a “pass.” Since, in this example, the gases pass through the shell two times before exiting, this boiler is called a two-pass boiler. Due to their efficiency and reliability, fire-tube, or shell, boilers are suitable for steam-intensive industries and continuous or batch operation.

The advantages of the fire-tube boiler design include the following:

The disadvantages of the fire-tube boiler design include the following: 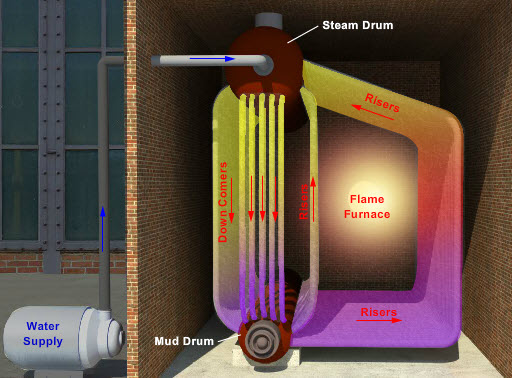 A water-tube design is the exact opposite of a fire tube. Here, the water is inside the tubes and the combustion gases pass around the outside of the tubes. Water-tube boilers may vary in design; however, their basic principles of operation are the same. This type of boiler consists of two drums, a series of water tubes, a feedwater inlet line, and a combustion gas outlet stack. These tubes are connected to a steam drum and a mud drum. The water is heated and steam is produced in the upper drum. Water-tube design boilers are better suited for applications requiring large amounts of steam, such as industrial process applications, and are used less frequently for heating applications.

The advantages of the water-tube boiler design include the following:

The disadvantages of the water-tube design include the following: