A PID controller combines the proportional response to a change while eliminating the offset error.  It anticipates changes by measuring the initial rate of change for accurate control. Setting up a PID controller or tuning to a process loop is a little more involved than simpler controllers.

However, there are some processes that cannot tolerate offset error, yet need good stability. The logical solution is to use a control mode that combines the advantages of proportional, reset, and rate action. This article describes the mode identified as proportional plus reset plus rate, commonly called Proportional Integral Derivative (PID).

When an error is introduced to a PID controller, the controller’s response is a combination of the proportional, integral, and derivative actions, as shown in Figure 1.

As you can see from the combined action curve, the output produced responds immediately to the error with a signal that is proportional to the magnitude of the error and that will continue to increase as long as the error remains increasing.

You must remember that these response curves are drawn assuming no corrective action is taken by the control system. In actuality, as soon as the output of the controller begins to reposition the final control element, the magnitude of the error should begin to decrease. Eventually, the controller will bring the error to zero and the controlled variable back to the setpoint. 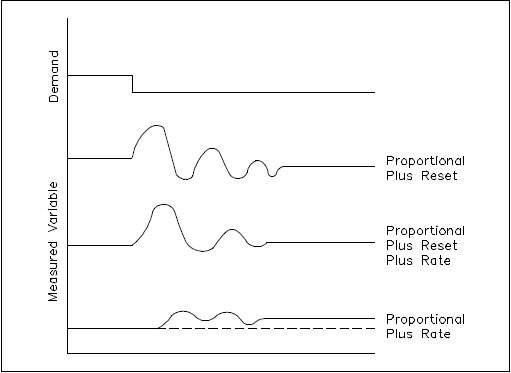 For more information on Process Controls, sign up for our online training at www.myodesie.com or contact us at sales@techtransfer.com for a class at your facility.