There is a high demand for qualified Automatic Control Systems Engineers in industry.  Say that there is no automatic control, then there will be no heating or air-conditioning in the way that we have become used to; whereas certain temperature and humidity levels are maintained. Refrigerators and stoves would not be able to regulate their operation. Automatic control systems can also be found industrially in numerous applications, such as quality control of manufactured parts, automation, machine tool control, space technology, computer systems, and robotics. A thorough understanding of the basics is a great place to start.

Automatic control compares desired output to a setpoint and adjusts to meet the desired output.  One of the fundamental types of control systems is proportional control, which can control speed, temperature, level, or pressure in a controlled band of setpoints.

Proportional control is also referred to as throttling control.

To demonstrate, let’s look at Figure 1. 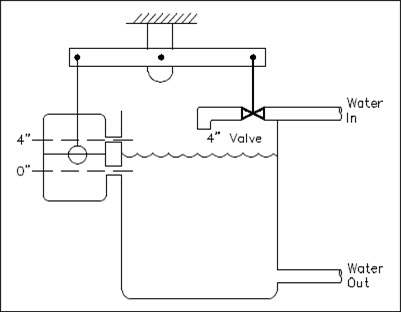 In this example of a proportional level control system, the flow of supply water into the tank is controlled to maintain the tank water level within prescribed limits. The demand of disturbances, placed on the process system, are such that the actual flowrates cannot be predicted. Therefore, the system is designed to control tank level within a narrow band in order to minimize the chance of a large demand disturbance causing overflow or runout. A fulcrum and lever assembly is used as the proportional controller. A float chamber is the level measuring element, and a 4-in stroke valve is the final control element. The fulcrum point is set such that a level change of 4-in causes a full 4-in stroke of the valve. Therefore, a 100% change in the controller output equals 4-in.

The proportional band is the input band over which the controller provides a proportional output and is defined as follows:

For this example, the fulcrum point is such that a full 4-in change in float height causes a full 4-in stroke of the valve.

The controller has a proportional band of 100%, which means the input must change 100% to cause a 100% change in the output of the controller.