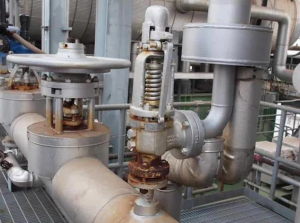 On June 11, 2008, work was being performed on a heat exchanger in a Goodyear Tire manufacturing plant in Houston, TX. During the course of the work, the relief valve and the pressure control valve were isolated from the system. Without the control valve, the pressure in the heat exchanger rose past the safe operating limits. With no relief valve to prevent the overpressure condition, the pressure increased until the heat exchanger violently ruptured, which threw off debris and the ammonia contained in the system. Tragically, this led to the loss of an employee’s life.

Many industrial and manufacturing facilities use pressurized liquids and gases in systems to perform functions, such as tool and instrument operation, energy production, and heating and cooling. All systems, regardless of how well they were engineered or the quality of the materials used, will have a maximum pressure they can withstand before a failure occurs. A system that fails in this manner can result in production downtime, destruction of expensive equipment, and even loss of life.

One method used to prevent such a failure is the installation of automatic pressure relieving devices. Two such devices, relief valves and safety valves, are used to automatically relieve overpressure conditions in systems.

Both relief and safety valves are considered pressure relieving devices. Both prevent over-pressurization of a system or component by allowing some of the fluid to escape through a relief path. However, there are several important distinctions between the two, which can determine the proper valve to be selected for a given application.

Relief valves are used in applications involving a noncompressible fluid, such as water or oil, and where there is little chance of an explosion occurring. Unlike compressible gases, it is not necessary to remove large amounts of fluid to obtain a quick reduction in pressure. For this reason, relief valves are designed to gradually open in proportion to the pressure felt above the valve’s setpoint. This minimizes the amount of fluid lost, while still protecting the system.

Safety valves typically are used in applications involving a compressible gas or vapor, which could pose an explosion hazard when over-pressurized. For this reason, safety valves are designed to rapidly “pop” open to their fully open position. This allows for maximum flow of the fluid through the valve and the fastest drop in pressure possible.