There are three types of standard DC motors: series, shunt, and compound (cumulative). The selection of the proper type of motor is based on the type of load that the motor is intended to operate.

The following chart provides a comparison of the main operating characteristics of the series, shunt, and cumulative DC motors. 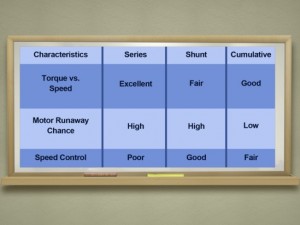 A shunt motor has the field winding in parallel with the armature. The characteristics of a shunt-wound motor give it very good speed regulation, and it is classified as a constant speed motor, even though the speed does slightly decrease as load is increased. Shunt-wound motors are used in industrial and automotive applications where precise control of speed and torque are required.

A compound motor has both a series and a shunt connected field winding. This gives it a greater torque than a comparable shunt motor and is fairly constant speed. Loads such as presses, shears, and reciprocating machinery are often driven by these types of motors.