What is ‘Soft Foot’ and Why Does it Affect Shaft Alignment

What is ‘Soft Foot’ and Why Does it Affect Shaft Alignment

Any condition where less than perfect surface contact is made between the underside of the machine’s feet and the surface of the base plate, or frame, is called soft foot. Soft foot is similar to being seated at a wobbling table. The table wobbles because at least one leg does not come in perfect contact with the floor. For a table, this is considered an inconvenience; with industrial equipment, this condition will result in misalignment and equipment damage. 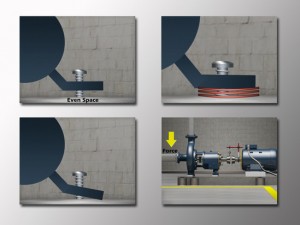 The types of soft foot include the following:

Effects from soft foot in industrial applications include the following:

To have smooth-running machines, soft foot must be detected and eliminated on both the driving and driven machines before performing the alignment.

The following are typical methods to correct soft foot:

During the precision phase, each foot is individually checked for soft foot before making any corrections. A dial indicator is used to ensure the most precise measurement possible.

Adjusting one foot at a time will eventually be successful in removing the soft foot, but taking a few minutes to examine the soft foot on the entire machine can save hours of tedious corrections. In some cases, eliminating the largest soft foot will actually remove the soft foot at the other feet.

Although eliminating all of the soft foot is the goal, sometimes difficult problems or time restrictions are encountered. If the base, feet, or legs of the machine are too flexible, for example, final adjustments may cause more frustration than results. A certain amount of tolerance is typically allowed and will vary by the machine or local guidelines. However, when the measurements have been taken properly using a solid base, it should be possible to limit the soft foot to within 1 mil, or 0.001 inches.

To learn more about implementing maintenance and training programs to teach personnel about proper detection and correction of soft foot, as well as other industry-related issues, please contact us at (813)908-1100.