While direct current has one form of power, alternating current has three different forms of power that are related in a unique relationship. In this chapter, you will learn that power in AC circuits cannot be calculated in the same manner as in DC circuits.

In AC circuits, current and voltage are normally out of phase and, as a result, not all the power produced by the generator can be used to accomplish work. By the same token, power cannot be calculated in AC circuits in the same manner as in DC circuits. The power triangle, shown in Figure 1, equates AC power to DC power by showing the relationship between generator output (apparent power – S) in volt-amperes (VA), usable power (true power – P) in watts, and wasted or stored power (reactive power – Q) in volt-amperes-reactive (VAR). The phase angle (Θ) represents the inefficiency of the AC circuit and corresponds to the total reactive impedance (Z) to the current flow in the circuit. 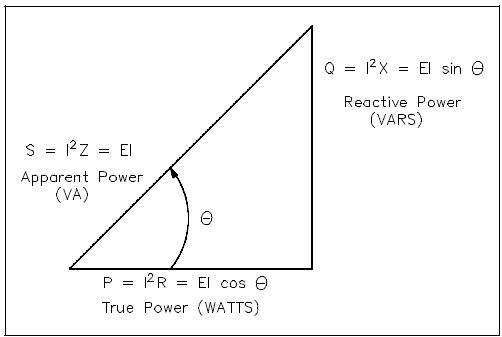 The power triangle represents comparable values that can be used directly to find the efficiency level of generated power to usable power, which is expressed as the power factor (discussed later). Apparent power, reactive power, and true power can be calculated by using the DC equivalent (RMS value) of the AC voltage and current components along with the power factor.

True power (P) is the power consumed by the resistive loads in an electrical circuit. Equation(9-2) is a mathematical representation of true power. The measurement of true power is in watts.

Reactive power (Q) is the power consumed in an AC circuit because of the expansion and collapse of magnetic (inductive) and electrostatic (capacitive) fields. Reactive power is expressed in volt-amperes-reactive (VAR). Equation (9-3) is a mathematical representation for reactive power.

Unlike true power, reactive power is not useful power because it is stored in the circuit itself. This power is stored by inductors, because they expand and collapse their magnetic fields in an attempt to keep current constant, and by capacitors, because they charge and discharge in an attempt to keep voltage constant. Circuit inductance and capacitance consume and give back reactive power. Reactive power is a function of a systems amperage. The power delivered to the inductance is stored in the magnetic field when the field is expanding and returned to the source when the field collapses. The power delivered to the capacitance is stored in the electrostatic field when the capacitor is charging and returned to the source when the capacitor discharges. None of the power delivered to the circuit by the source is consumed. It is all returned to the source. The true power, which is the power consumed, is thus zero. We know that alternating current constantly changes; thus, the cycle of expansion and collapse of the magnetic and electrostatic fields constantly occurs.

In a capacitive circuit, the current leads the voltage and is said to have a leading power factor, as shown in Figure 3.

Example: A 200Ω resistor and a 50 ΩXL are placed in series with a voltage source, and the total current flow is 2 amps, as shown in Figure 4.

The design of three-phase AC circuits lends itself to a more efficient method of producing and utilizing an AC voltage.

A three-phase (3φ) system is a combination of three single-phase systems. In a 3φ balanced system, power comes from a 3φ AC generator that produces three separate and equal voltages, each of which is 120° out of phase with the other voltages (Figure 10).

Total power (PT) is equal to three times the single-phase power. Equation (9-11) is the mathematical representation for total power in a balanced delta or wye load.

As you can see, the total power formulas for delta- and wye-connected loads are identical.

A balanced three-phase load has the real, apparent, and reactive powers given by:

Each phase of a delta- connected 3φAC generator supplies a full load current of 200 A at 440 volts with a 0.6 lagging power factor, as shown in Figure 14.

Each phase of a wye- connected 3φ AC generator supplies a 100 A current at a phase voltage of 240V and a power factor of 0.9 lagging, as shown in Figure 15. 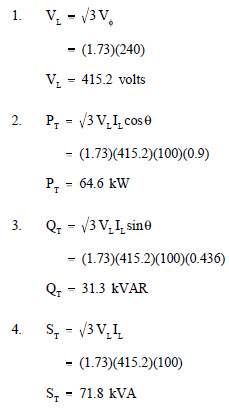 Example: A 3φ balanced system, as shown in Figure 16a, contains a wye load. The line-to- line voltage is 240V, and the resistance is 40Ω in each branch. 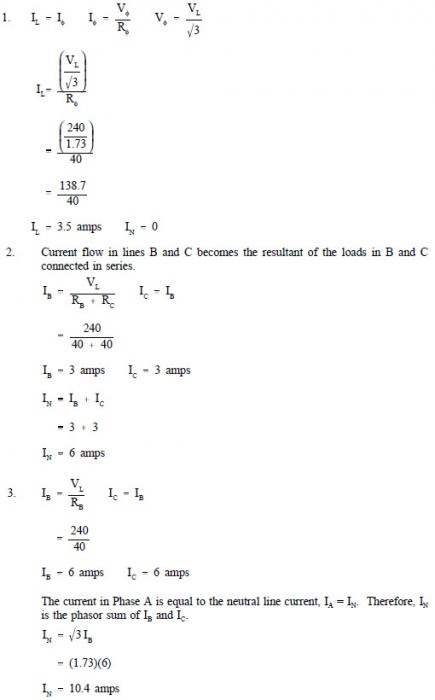 In a fault condition, the neutral connection in a wye-connected load will carry more current than the phase under a balanced load. Unbalanced three-phase circuits are indicated by abnormally high currents in one or more of the phases. This may cause damage to equipment if the imbalance is allowed to continue.