In an industrial facility, convective heat transfer is used to remove heat from a heat transfer surface. The liquid used for cooling is usually in a compressed state, (that is, a subcooled fluid) at pressures higher than the normal saturation pressure for the given temperature. Under certainconditions, some type of boiling (usually nucleate boiling) can take place.

More than one type of boiling can take place within an industrial facility. A discussion of the boiling processes, specifically local and bulk boiling, will help the student understand these processes and provide a clearer picture of why bulk boiling (specifically film boiling) is to be avoided.

As system temperature increases or system pressure drops, the bulk fluid can reach saturation conditions. At this point, the bubbles entering the coolant channel will not collapse. The bubbles will tend to join together and form bigger steam bubbles. This phenomenon is referred to as bulk boiling. Bulk boiling can provide adequate heat transfer provided that the steam bubbles are carried away from the heat transfer surface and the surface is continually wetted with liquid water. When this cannot occur film boiling results.

The process of going from nucleate boiling to film boiling is graphically represented in Figure 1. The figure illustrates the effect of boiling on the relationship between the heat flux and the temperature difference between the heat transfer surface and the fluid passing it.

Four regions are represented in Figure 1. The first and second regions show that as heat flux increases, the temperature difference (surface to fluid) does not change very much. Better heat transfer occurs during nucleate boiling than during natural convection. As the heat flux increases, the bubbles become numerous enough that partial film boiling (part of the surface being blanketed with bubbles) occurs. This region is characterized by an increase in temperature difference and a decrease in heat flux. The increase in temperature difference thus causes total film boiling, in which steam completely blankets the heat transfer surface.

In practice, if the heat flux is increased, the transition from nucleate boiling to film boiling occurs suddenly, and the temperature difference increases rapidly, as shown by the dashed line in the figure. The point of transition from nucleate boiling to film boiling is called the point of departure from nucleate boiling, commonly written as DNB. The heat flux associated with DNB is commonly called the critical heat flux (CHF). In many applications, CHF is an important parameter. For example, in a boiler, if the critical heat flux is exceeded and DNB occurs at any location, the temperature difference required to transfer the heat being produced increases greatly.

In conduction heat transfer problems, the object being studied is usually a solid. Convection problems involve a fluid medium. Radiation heat transfer problems involve either solid or fluid surfaces, separated by a gas, vapor, or vacuum. There are several ways to correlate the geometry, physical properties, and temperature difference of an object with the rate of heat transfer through the object. In conduction heat transfer, the most common means of correlation is through Fouriers Law of Conduction. The law, in its equation form, is used most often in its rectangular or cylindrical form (pipes and cylinders), both of which are presented below.

The use of Equations 2-4 and 2-5 in determining the amount of heat transferred by conduction is demonstrated in the following examples.

1000 Btu/hr is conducted through a section of insulating material shown in Figure 2 that measures 1 ft2 in cross-sectional area. The thickness is 1 in. and the thermal conductivity is 0.12 Btu/hr-ft-° F. Compute the temperature difference across the material. 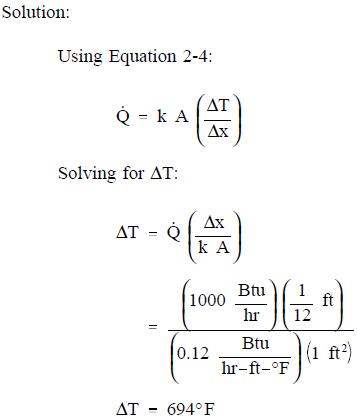 A concrete floor with a conductivity of 0.8 Btu/hr-ft-° F measures 30 ft by 40 ft with a thickness of 4 inches. The floor has a surface temperature of 70° F and the temperature beneath it is 60° F. What is the heat flux and the heat transfer rate through the floor? 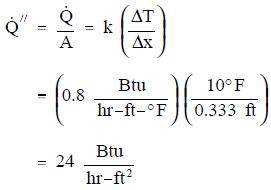 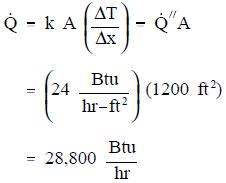 It is possible to compare heat transfer to current flow in electrical circuits. The heat transfer rate may be considered as a current flow and the combination of thermal conductivity, thickness of material, and area as a resistance to this flow. The temperature difference is the potential ordriving function for the heat flow, resulting in the Fourier equation being written in a form similar to Ohms Law of Electrical Circuit Theory. If the thermal resistance term Δx/k is writtenas a resistance term where the resistance is the reciprocal of the thermal conductivity divided by the thickness of the material, the result is the conduction equation being analogous to electrical systems or networks. The electrical analogy may be used to solve complex problems involving both series and parallel thermal resistances. The student is referred to Figure 3, showing the equivalent resistance circuit. A typical conduction problem in its analogous electrical form is given in the following example, where the “electrical” Fourier equation may be written as follows.

A composite protective wall is formed of a 1 in. copper plate, a 1/8 in. layer of asbestos, and a 2 in. layer of fiberglass. The thermal conductivities of the materials in units of Btu/hr-ft-oF are as follows: kCu = 240, kasb = 0.048, and kfib = 0.022. The overall temperature difference across the wall is 500XF. Calculate the thermal resistance of each layer of the wall and the heat transfer rate per unit area (heat flux) through the composite structure. 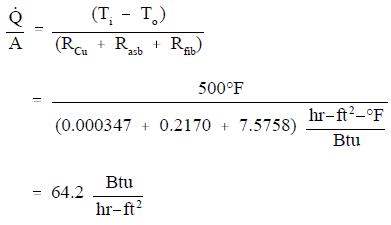 Heat transfer across a rectangular solid is the most direct application of Fouriers law. Heat transfer across a pipe or heat exchanger tube wall is more complicated to evaluate. Across a cylindrical wall, the heat transfer surface area is continually increasing or decreasing. Figure 4 is a cross-sectional view of a pipe constructed of a homogeneous material.

The surface area (A) for transferring heat through the pipe (neglecting the pipe ends) is directly proportional to the radius (r) of the pipe and the length (L) of the pipe.

As the radius increases from the inner wall to the outer wall, the heat transfer area increases.

The development of an equation evaluating heat transfer through an object with cylindrical geometry begins with Fouriers law Equation 2-5.

From the discussion above, it is seen that no simple expression for area is accurate. Neither the area of the inner surface nor the area of the outer surface alone can be used in the equation. For a problem involving cylindrical geometry, it is necessary to define a log mean cross-sectional area (Alm). 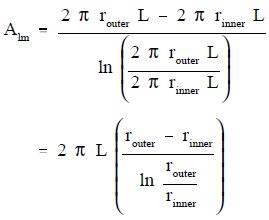 This expression for log mean area can be inserted into Equation 2-5, allowing us to calculate the heat transfer rate for cylindrical geometries. 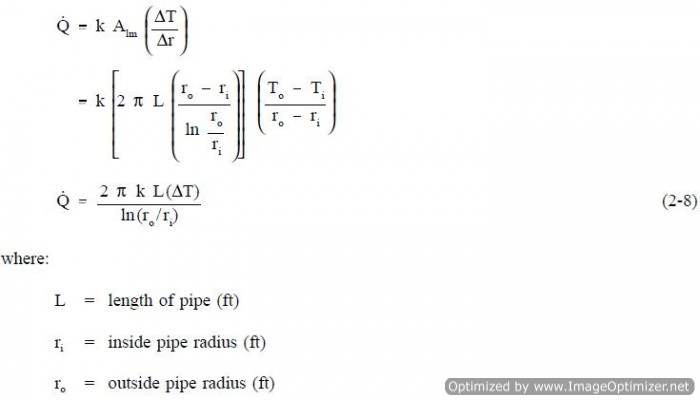 Calculate the heat transfer rate through the pipe.

Calculate the heat flux at the outer surface of the pipe. 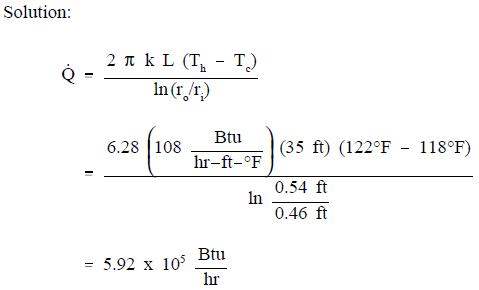 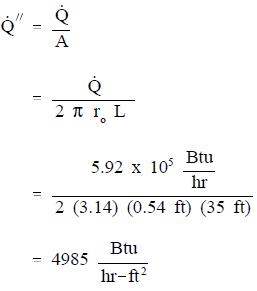 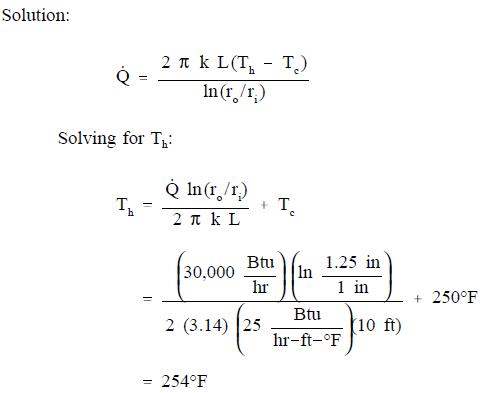 The evaluation of heat transfer through a cylindrical wall can be extended to include a composite body composed of several concentric, cylindrical layers, as shown in Figure 5. 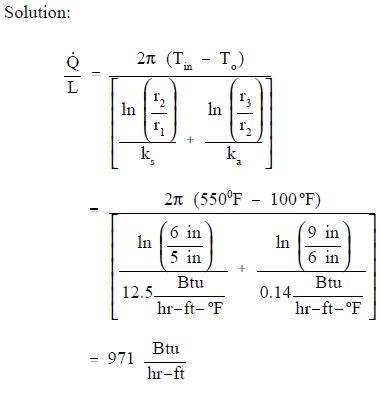